… or Zen and the Art of Fashion Design

The fashion world is a rapidly evolving microcosm of celebrities, trends, and awards. Recently, the highest accolades and brightest spotlights are focused on Asian-American designers.

The Council of Fashion Designers of America (CFDA) awarded the 2010 best new designers of the Swarovski Year Awards to three men of Asian descent:

In addition to these awards, the fashion council awarded three scholarships of $25,000 each to student designers of Asian heritage. 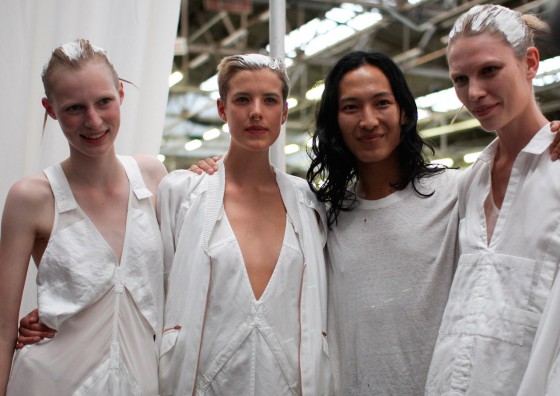 The 2011 Spring-Summer New York Fashion Week showcased an impressive array of Asian and Asian-American designers. With the likes of Alexander Wang, Anna Sui, Jason Wu, Vivienne Tam, and Vera Wang, these designers present an eclectic mix of fabrics, colors, prints and styles. Their 2011 collections offer a glimpse into some of this year’s most exciting trends.

Anna Sui shows off her signature style with funky prints, bold colors and fun florals. Her chunky accessories and flowing fabrics are showcased with a decidedly Bohemian flare.

Vivienne Tam’s Spring 2011 collection is all about texture and femininity. Tattered edges, crocheted features, eyelet and lace accents along with subtle shades of blue and cream that are pretty and girlish.

The increasing prominence of Asian-American designers in the fashion industry is perhaps the natural effect of an influx of student of Asian heritage in popular design schools in the US and abroad. Schools like the Fashion Institute of Technology and the Parsons the New School for Design have seen a drastic increase in the number of students from Asia.

This shift may be attributable to a natural movement of workers from garment production to design. Consider the designers of Jewish heritage, such as Calvin Klein, Donna Karan, and Ralph Lauren dominated the New York fashion world of the 80’s. These designers are the cultural descendants of the immigrant community that created that city’s highly successful garment district. Today’s Asian-American designers may have followed the same path from factory workers and owners to retailers and designers.

Regardless of their path to success, Asian and Asian-American designers have placed an indelible mark on today’s fashion industry and will most likely be exerting their considerable influence for years to come.

At the same time, a new generation of Asian Models is getting a lot more exposure during Western Fashion Weeks. Some of them are already considered as Top Models like: Liu Wen, (the first Asian spokesmodel for Estée Lauder) and Fei Fei Sun (Dsquared2 new face).

This phenomena is a first in the Western Fashion Industry and will endure for a long time.