Blow Up Directed by Michelangelo Antonioni was a film loosely based on the life of David Bailey and was one of the first films I ever saw relating to the Fashion Biz. In fact, it was the first time I was ever exposed to fashion from the vantage point of a photographer. 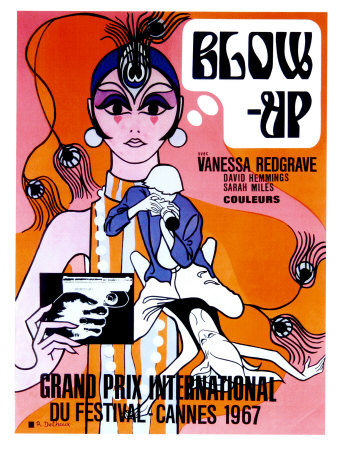 It was a real eye opener for me in many respects and may have subconsciously effected how I perceived myself within the “BIZ”.  Things have certainly changed however. If I treated models the way David Hemmings did, the chances of my getting models in the future would be severely diminished and I would probably get a swift kick in the Balls! I really love the set designs, the clothing and the make-up & hair.  Some serious experimentation was going on here and the creative spirit of the 60’s time frame is so well expressed throughout the film. Also, check out the music, tantalizingly tacky with a scene of the Yardbirds doing a gig at a club in London. Both Sarah Miles and Vanessa Redgrave are absolutely wonderful in this cult film. There is also an appearance with model Veruschka von Lehndorff.

So many of today’s photographers have been influenced by the simplicity and sparseness of the 60’s. Steven Meisel comes to mind when seeing this, but he recreated the ambiance 40 years later. I consider this epoch as one of the most creative in Fashion Photography. But from a Sociological perspective, we have come a long way. None the less Blow Up stands as one of the most important films of the century, as it so well ensconces the paradigm of that time frame from almost all of the disciplinary vantage points; Music, Fashion, Photography, Architecture, Psychology, Philosophy and Sociology.

Hope you enjoy these videos as much as I do and perhaps they might spark your creative juices.