I wrote this in response to a YouTube subject regarding Bokeh, link after my comments:
In my business as a Fashion Photographer…shallow depth of field is out of fashion… wide angle all in focus and raw is what is happening now. Of course, you can mix in the few blown out shots as part of the whole 8-12 page story but…bye Bye Bokeh! https://benjaminkanarek.com/album/paris-tres-chic

The systematic blurred background is way out of fashion in fashion photography today. When used, it is often done to balance the story, i.e. 8-14 pages with wide angle raw in your face all in focus composition oriented images and your classic herd mentality blurred background images. However, one of the major reasons many of us would use that “300mm f/2.8” look was quite banal. It was so people could see the fashion well and it would look like shooting in a soft daylight studio, with a wash of colour that the photographer could control just by moving rotating their lens by one degree.

Often you would know the clothing colours beforehand and chose complimentary coloured backgrounds that would enhance the overall image. That IS a style and done for a reason, as I have done here for ELLE magazine. But the systematic use of bokeh for the sake of bokeh doesn’t make you stand out from the rest, it makes you as common as margarine on dry toast. It is the contrast that makes an image stand out in a story. That is why I will often do some B&W images mixed in with colour to just make the whole story more interesting and varied. SYSTEMATIC use of totally blown out backgrounds is old and mind-numbing. That’s not me speaking, that is the overwhelming majority of magazine editors speaking and I know, because I work for them. Bokeh used without understanding the reason why is flagrant herd mentality. So make your images interesting and think about what you wish to accomplish to stand out from the crowd.

Herman Surkis on a forum wrote the following and my response:

“BK has already responded. But another answer would be to simply look at the various versions of Elle or Vogue. Each country has its own particular feel and look.

You can shoot for yourself, the best choice. But if you are trying to make a living, knowing what is trendy, or even setting the trend is the best way. Some would say that being on the cutting edge is a precarious position, and that being just below the cutting edge is the best for a journeyman photographer. They will always have work. The ones setting the trends to come in and out of fashion, and they had better make enough money to survive when they are in, for when the new kid sets the next trend and is in fashion.

It is such a cliche that it is actually a given that:
More photographers have failed, not through a lack of talent, but due to poor business sense.”

This will sound extremely elitist and perhaps it is. I am in a position to affect trends because my works are seen on an international scale. To be a trendsetter, you need to have sufficient exposure to do so. My choice not to or to use a specific style is my decision based either on my observations of the market or my just wanting to do so and taking the risk that perhaps the magazine will say, don’t like it, re-shoot or please pull back or whatever. Fortunately, that doesn’t happen very often. The greater risk is for a whole new team to come into the magazine and fire pretty much all of the contributors associated with the past administration. That has happened to me often, as it has for most of us working in this field at the level we are working at. You don’t have to be a new kid to set a new trend, you just have to have the courage to re-invent yourself and live with the consequences of your actions.

Alexis Kapaun in Athleisure for ELLE by Benjamin Kanarek

Gao Ying is Blonde Bombshell for SORBET by Benjamin Kanarek 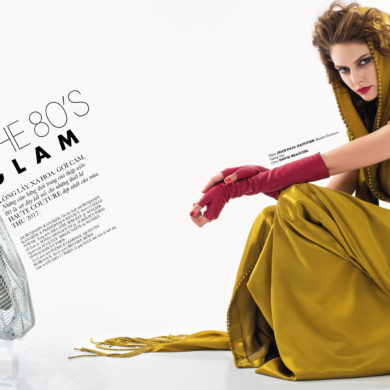