Here goes..my rant regarding the loss, theft or whatever of my package that was NEVER delivered to me. Its is disgusting, unethical, unscrupulous and repugnant that people can steal without repercussions! I am a Canadian living in Paris and have had 3 packages STOLEN by thieves working for the fantastic company called… ‪#‎LaPoste‬ / ‪#‎Colissimo‬. I did get your classic standardised letter of apology. You know, the one that was farted out of their computer, used to calm us down and rationalise their feeble uselessness at doing their jobs that they shouldn’t have in the first place.

In Canada they would be fucking sweeping floors in the public toilettes! Perhaps not, that is too great a responsibility. How utterly useless! This partially privately and publicly owned company is more akin to  a 3rd world country company than part of the highly polished and affluent EU corporate community .To say that I am angry, would be the understatement of the year.  If I could, I would love to charge them with theft like any common thief! Perhaps I will try to do so.

It was claimed by them (see below) that my package was delivered to my post box. Interesting, it could NEVER hold the package. The package was 5 x larger than my mail box!!! The following day, they said it was delivered to my Bureau Post “La Poste” at Places Abbesses 75018. I know the people who work there and helped them look for the box for over 1 hour. It was never there, then I got a letter saying it was lost! Lost my ass. It was STOLEN!!!! How the FUCK could they loose a package that was in their possession right up to the time they said they delivered it…I mean twice!!!! How can they deliver the same package twice??? Cut the fucking thing in half???? Absolutely KAFKA!!!

Below the actual tracking item. Notice it says delivered to my mailbox on the 18th and then Distributed to the Post Office on the 19th…

They have such a bad reputation, the highly reputable watchdog association 60 Million Consumers have bashed them. They call the main Paris postal depot “Briard the Bermuda Triangle of Packages.”

I rest my case!

The Poste did it again!!!! I was expecting an International Signed Package and again the Poste left it in the foyer of my building on top of the mailboxes for anyone to steal. No signature! Nothing. I was lucky that the Art Gallery of my building phoned me to tell me that they have a box for me that was left unattended!!! WTF is wrong with you people!!! You SUCK!!!!! 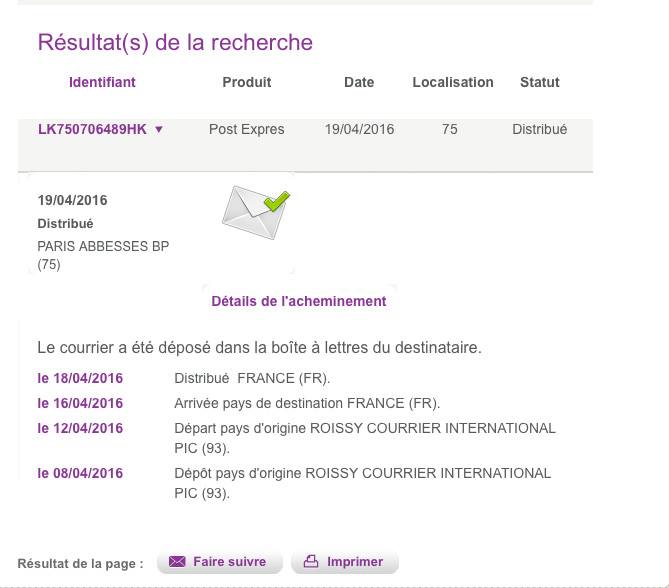