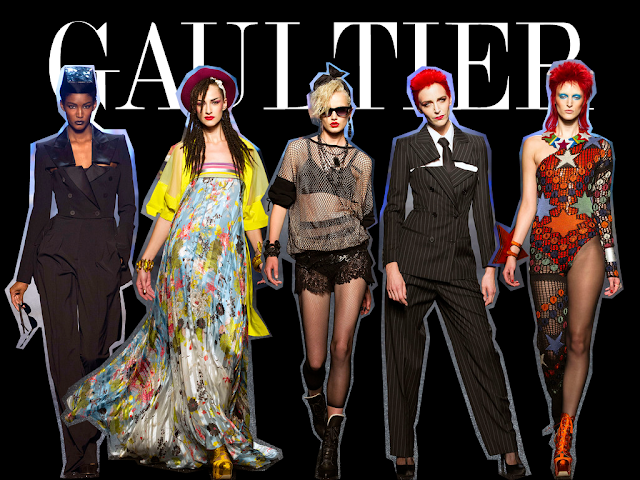 What is an icon? It is probably one of the most overused word of this century. Nowadays, it has synonyms such as god,idol or even hero, but let’s don’t forget what is the real meaning of the word icon: its definition clearly depicts an icon as a person regarded as a symbol of a belief or a cultural movement. When I see people say that Justin Bieber is an icon, I just want to laugh so hard: people should really start to think first before they open their mouth. Seriously.

Now that Paris Fashion Week is officially over, I had the time to see all the Spring/Summer 2013 collections and my heart literally beats for the one designed by one of my favorite designers ever: Jean Paul Gaultier. And I know one thing for sure: he does know what the word icon means. The show and collection were a real homage to all the pop stars of the eighties, and the big ones: Grace Jones, Boy George, Madonna, Annie Lennox, David Bowie (even if he was already big in the seventies), or even the late Michael Jackson. We can not deny the cultural impact of these artists had: sexual racial liberation and even for women, not to mention the most extravagant looks that we were given to see. Being an icon is to be part of a time and to change it. It is not because you have 30 million followers on Twitter, which gives you the right to call yourself an icon.

Although some critics accused Gaultier of flamboyance and spectacle, emphasizing theatricality and forgetting about fashion, I am opposed to these criticisms. We live in an age where everything must be normal, and in this time of global crisis, Jean Paul Gaultier had this great idea to not only celebrate the madness of the 80s, but also to make us understand that we can and have every right to be whoever we want to be. The choice of his longtime friend aka the one and only Queen of Pop, Madonna, or even David Bowie means everything: it is time to break again the barriers and to free ourselves and have fun with fashion. What would be the point to follow fashion if it is just to stay normal? I had read that this collection was perfect for Halloween.

I would say in return Gaultier’s collection is not an army of costumes, it is in fact a clever way not to take ourselves too seriously while taking risks (because we must have a lot of courage to dress like Bowie in his Ziggy Stardust era in the street). And more importantly, it is a comprehensive overview of the legacy that these artists have left us in fashion. After all, Dries Van Noten and Riccardo Tisci were recently inspired by Bowie as well, right? So why do critics harp to say that this is a collection for cabaret? So celebrate his creativity and work before it is too late, do not make the same mistake as many people did with another icon: Michael Jackson. Yes, because Jean Paul Gaultier is an icon.
— Don’t forget to check out very soon my exclusive interview with Jean Paul Gaultier! —
Eric Waroll