The 68th Annual Golden Globes was one of the most enjoyable awards ceremonies that I have ever had the pleasure of attending. For the most part, I accredit that to host Ricky Gervais. His introductions did not let me down and neither did the fashion. 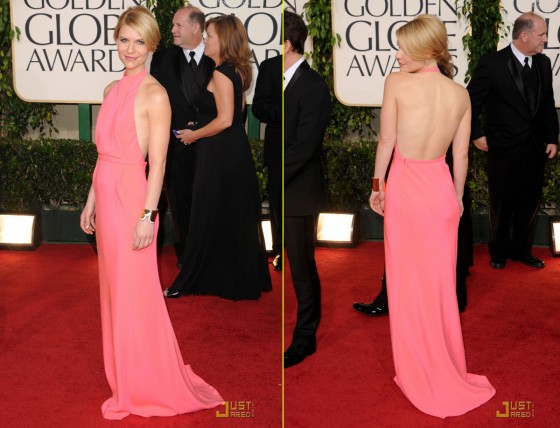 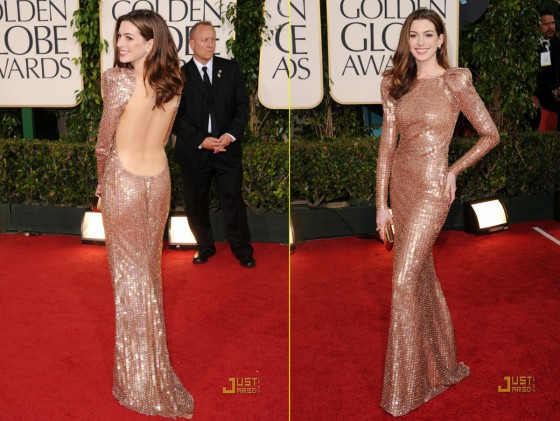 With a sweetheart neckline and a personality to match, Milla Jovovich was ever so inviting in her Armani Privé gown.

And, speaking of great personalities, I have to give an honorable mention to Claire Danes who was an absolute dear. While her gown’s silhouette lacked a certain something, the bright coral was lovely, complimenting her ever vibrant demeanor. 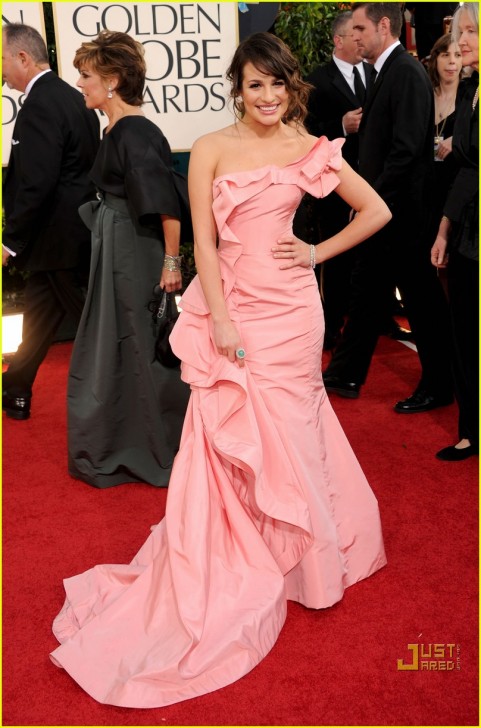 Fantails were another common thread on the red carpet, with the prize going to Lea Michele who was pretty and playful in a cascading pink Oscar de la Renta gown.

Jennifer Lopez looked stunning in a pale Marchesa ensemble complete with dainty shall, while Anne Hathaway combined conservative and sexy in her backless Armani Privé gown. Anne’s long sleeves seemed to be the style of the court this year. 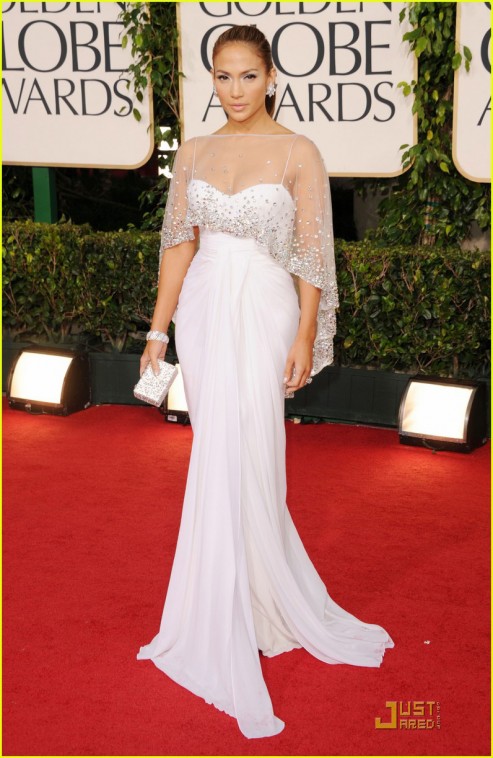 I for one am thrilled to see them back in vogue. Long sleeves create a truly elegant, seamless look, rarely sported in Hollywood, where starlets often believe that less fabric equals more publicity. Leighton Meester also looked divine in her sophisticated long-sleeved Burberry gown. 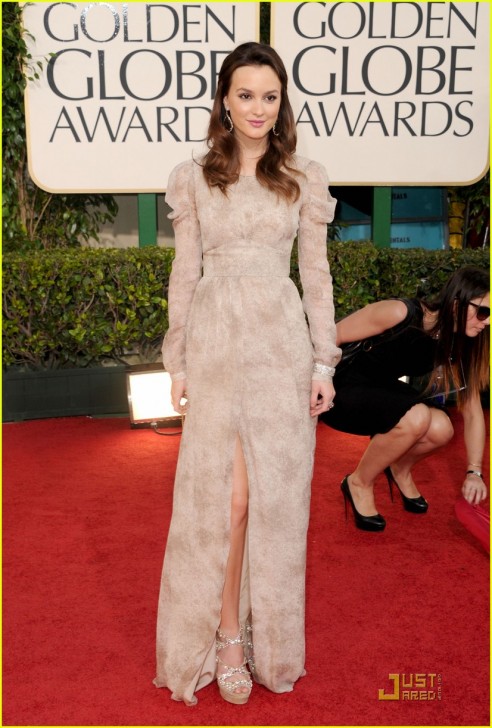 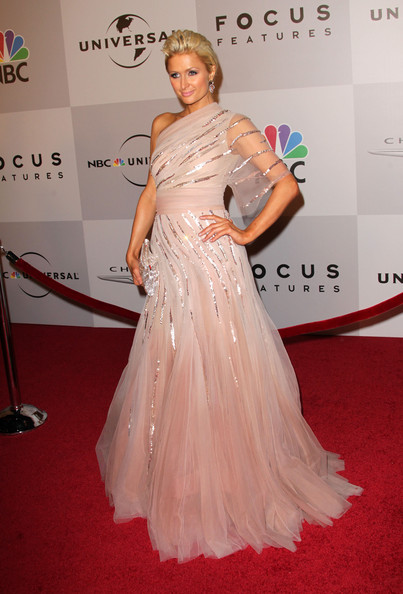 Paris Hilton, who did not even attend the ceremony, stood out to me at the Weinstein & Relativity Media After party, wearing a sensational Jean Fares Couture gown. It was a shame that it had no stage time, as it was the kind of dress that I would have liked to have seen on the winner of the Best Leading Actress.

Which leads me smoothly onto the actual Winner of the Best Actress in a Leading Role.

Natalie is not often noted for her fashion sensibilities, yet with her perfect symmetry and flawless skin I know she has the potential to shine like Nicole Kidman once did. Being sympathetic to the fact that she is pregnant, I can understand that style is not top of her priorities at the moment. Her entire career has led up to this acclaimed, award winning role and the photographs of her win will be documented forever. I would have loved to have seen her in the gown that Paris modeled so well.

Someone who had the advantage of a newly svelte figure, but didn’t capitalize on it, was Mad Men star Elisabeth Moss. Her look fell short in both dress and hairstyle, appearing disheveled overall. Beware Elisabeth, you’re surname could be easily confused with mess.

On the topic of Mad Men, I will suggest that large bows near the chest are never a good idea for the bigger busted ladies, yet Christina Hendricks most likely finds it challenging to find many dresses to cover her epic décolletage. 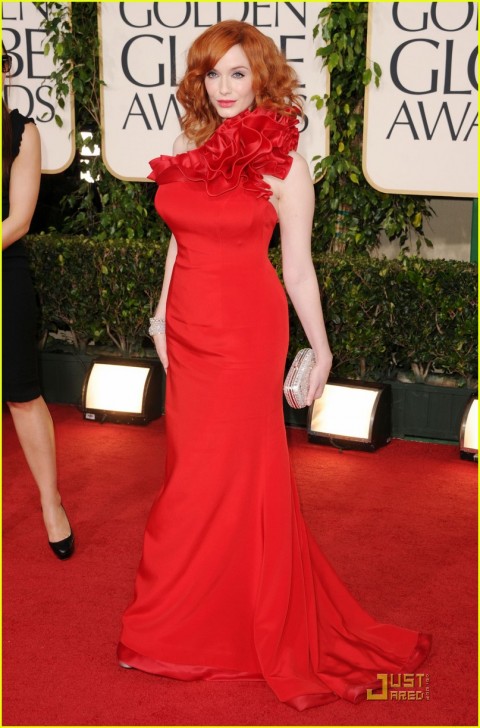 British Actress, Helena Bonham Carter gave us the level of originality we’ve come to expect from her. I rather liked her dynamically layered calf-length dress, and found it to be reminiscent of a dance costume. Her mismatched Capezios were in the same vein, a genius choice, as they are built especially for comfort and endurance. 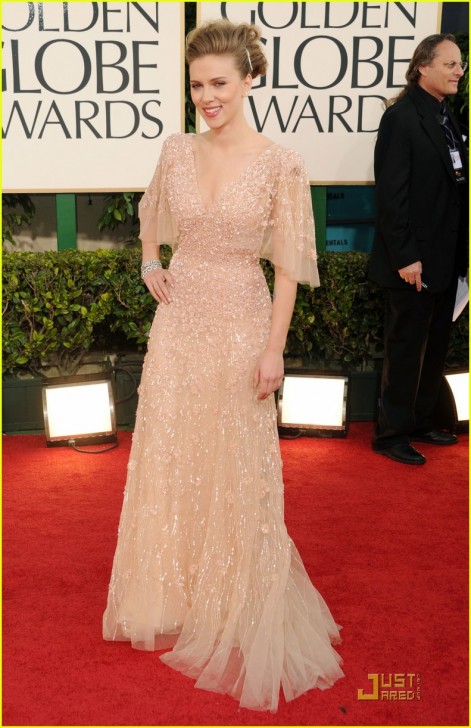 I also find it necessary to mention that Scarlett Johansson looked much better in person, in her Elie Saab gown, than she did in pictures. In the end, it seems that people weren’t able to look past her rather avant-garde choice of hairstyle.

In many ways, the Golden Globes serve as a dress rehearsal for the Academy Awards in February, so it will be interesting to see what changes between now and then.